REVIEWS!
"Edgy, moody, weirdly funny, definitely not like most of the theater you see around here. So, stop complaining that there isn't any interesting theater and go see this show! "
STW/Miyam's Musings

"Michael James Adams’s composition and performance is the utterly engrossing heartbeat of the production... A riddling experience, more poetry than prose and well-pleased with the plot that trusts the audience to create personal meaning, theater simple’s first adult production in seven years is worth the wait." City Arts Magazine

"The strength of this play was in the dialogue, which was witty, poetic, with intricate beautiful imagery as well as the solid acting by the entire cast... The live music and sound design by guitarist Michael James Adams was superb and left us in no doubt that the play took place south of the Mason-Dixon line."     Drama in the 'Hood

"So last Friday night I saw theater simple's Tilt Angel at West of Lenin. I haven't stopped thinking about it. I love this quote from Andrew's program notes. "Co-existing with the mythic ... is a deadpan humor and verbal dexterity that expands what could be maudlin emotion into a recognizable, personal and resonant story of transformation." It's witty, unconventional and it's a sort of fairy tale... There's also beautiful work by Llysa Holland and Carter Rodriquez. It's kind of a no brainer ... but bring your brain. It'll be even better if you bring your brain. And maybe invite a friend. And your friend's brain."  audience member to FB-at-large

TILT ANGEL
at West of Lenin, 203 N 36th St, Seattle WA USA 98103
[west of the Statue of Lenin, Fremont, in the funky Fremont neighborhood of Seattle - north of downtown just over the bridge, and a left before the troll.
[Yes - ACTUALLY west of Lenin. Just off-Center of the Universe]

An outsized and fantastic coming-of-age fairy tale/hero's journey concerning an outsized agoraphobic son, a ghost-mom, a volatile 3rd generation auto repair Dad and a heavenly messenger with unfinished business, TILT ANGEL is not your average theatrical outing
Subtitled: "A Deadpan Tennessee Fairy Tale", it's definitely for the grownups. Creepy, funny, melancholy, and dreamlike in turns, you'll have a rollercoaster of a ride.

Michael J Adams of Mike and Mike's Guitar Bar composed for the show and will be playing!! IF YOU MISSED IT, well, that's a pity. 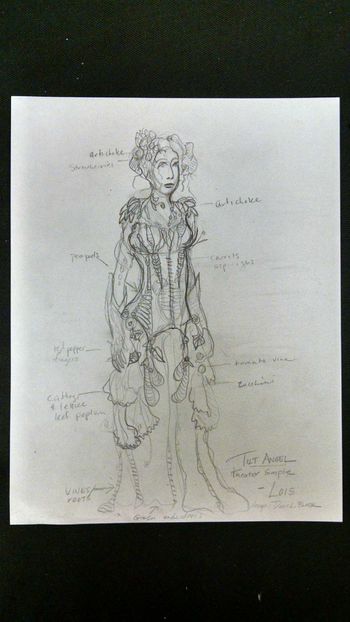 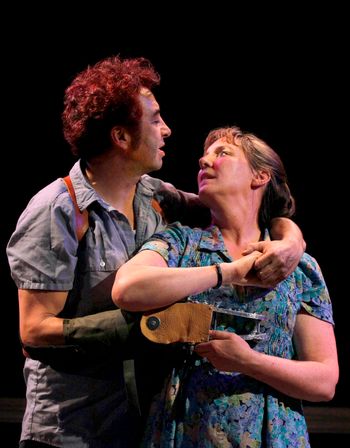 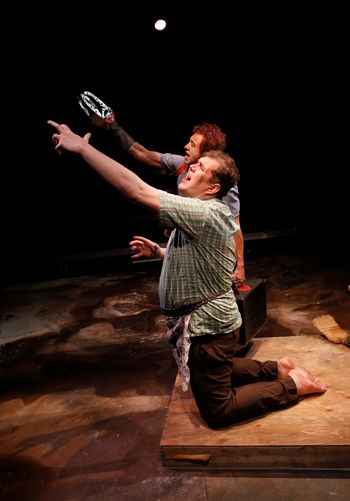 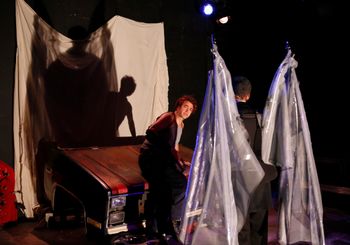 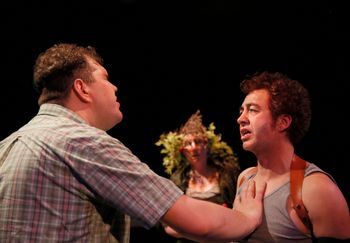 Share photo gallery
quick bios
DAN DIETZ, playwright
An affiliated writer with Playwrights' Center in Minneapolis, Dan’s plays include Tilt Angel (New Jersey Rep., Long Branch, NJ), tempOdyssey (Studio Theatre, DC), American Misfit (Boston Court, Los Angeles, CA), and Clementine in the Lower Nine (TheatreWorks, Palo Alto, CA). His work has been commissioned, developed and presented at such venues as Actors Theatre of Louisville, the Guthrie Theater, the Public Theater, Rattlestick Playwrights Theater, the Playwrights’ Center and the Lark. Dan has been honored with the Edgerton New American Play Award, an NEA/TCG Theatre Residency, an NNPN Rolling World Premiere, a Jerome Fellowship, and a Michener Fellowship. In 2003, he received the Heideman Award in 2003 for his play Trash Anthem. In 2010, he received the award again for his play Lobster Boy. He currently writes for the drama series Person of Interest on CBS..

QUICK FUN FACT:
This is theater simple’s 25th year producing and presenting. (More details about all our interesting stats soon.)  We have had this play in our sights 15 years, and are OVERJOYED to be doing it now, with a remarkable cast and design team. The stars aligned…